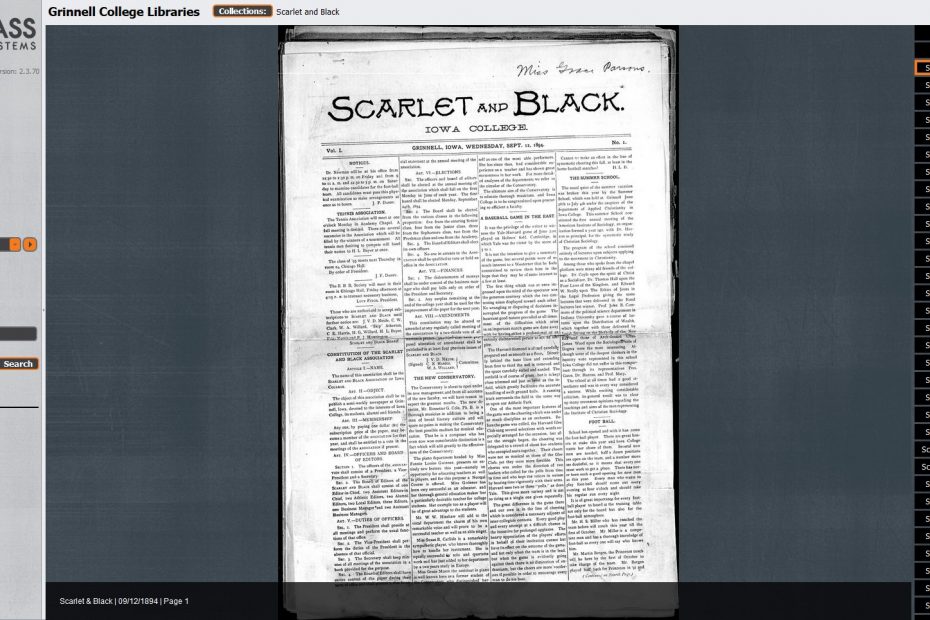 The Digital Liberal Arts Collaborative (DLAC) along with the College Libraries, DASIL, and other partners are excited to launch a public archive of plain-text files from Grinnell College’s student newspaper, the Scarlet and Black (1894-2010).

The project is available via a public GitHub repo.

As described in Grinnell Magazine: “Since its first publication on Sept. 12, 1894, the Scarlet & Black has served as a vital source of up-to-date news on campus, an important record of Grinnell College and a rich historical resource.”

In 2014, former Samuel R. and Marie-Louise Rosenthal Librarian of the College Richard Fyffe and Special Collections Librarian and Archivist Chris Jones contracted ArcaSearch to digitize past issues of the S&B and place them in a publicly-accessible database. This effort was described in articles published in Grinnell Magazine and the S&B.

That database launched in October 2014 and remains the primary access point for individuals interested in searching and browsing the S&B.

This project would not have been possible without the indefatigable efforts of Grinnell alum Papa Kojo Ampim-Darko, supported by Sarah Purcell. Julia Bauder provided invaluable technical expertise getting the project off the ground and providing access to the digitized S&B files. Katie Walden served as de-facto project manager, coordinating the various units and individuals involved. The support of Mike Conner and Sam Rebelsky (Professor of Computer Science), provided necessary access to HPC resources. Insight provided by Jerod Weinman (Associate Professor of Computer Science) helped us select Tessarct as an OCR resource. Additional thanks to Jarren Santos (Data Scientist and Grinnell College Class of 2017) of the Data Analysis and Social Inquiry Lab for his support of this project.