This series of blog posts is based on the work of Katie Orsund, in association with previous student workers at DASIL. It has been edited and formatted by Katie Orsund, Georgia Rawhouser-Mylet, and Charun Upara

After almost a decade of transcribing and analyzing censuses, we are excited to publicly reveal the Iowa Township Project. Applying powerful software to overlooked local history, we explore the facets of census data before arriving at a conclusion about the lives of women in Grinnell from 1870-1930.

This research began as a Mentored Advanced Project which sought to visualize the organization of land in Poweshiek County. The project evolved to encompass census data, providing a wealth of information such as household composition, personal wealth, education levels, and economic activity. Hidden amongst the data are stories waiting to be discovered. In a series of three blog posts, we will unfold the project and provide a guide to the historical context, methodology, and the resulting historical interpretations about women in Grinnell at the turn of the 20th century. In this first blog post, we explore the Township of Grinnell, introduce research methods in the digital humanities, and observe why studying a remote Iowa town can provides insights into American social and cultural history.

The second post will describe the methodology behind the Iowa Township Project, detailing both historical and data science methods. We will describe what goes into collecting, cleaning, and analyzing census data, then explain the application of ArcGIS.

Our third and final post will outline one important historical argument that emerges from these data. This post will illuminate the reality of women’s work in Grinnell and the surrounding area and demonstrate how census data, GIS analysis, and historical research and writing can come together to form a cohesive piece of digital humanities research. 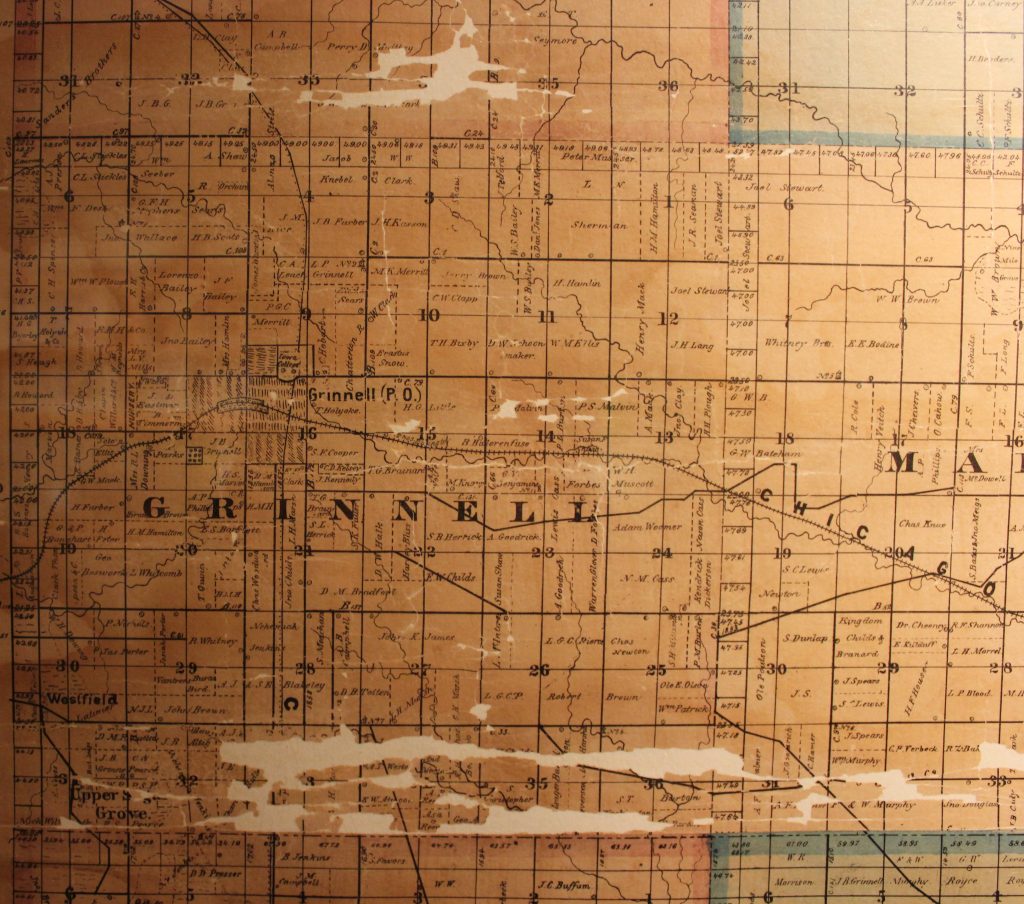 An undated plat map of Grinnell

In 1854, J.B. Grinnell founded the city at the crossroads of the Rock Island Railroad and the Minneapolis Saint Louis Railway.In addition to Grinnell’s two railroads, the town developed three factories and a private liberal arts college creating a mix of rural and urban life ideal for a case study. In addition to Grinnell, the more traditional farming townships of Grinnell, later renamed Grant, Richland, and Rock Creek, were added to the project, and the Iowa Township Project in its current form was born.

The Iowa Township Project applies digital humanities methods to an interest in the Iowa Township, creating a new wave of local history. Local history has existed through county museums and other local associations since the early twentieth century.1 However, local history remains undeveloped as a field of history, making the Iowa Township Project all the more important a contribution. A revival that began in 2009 as a pop-up art and history project in Cambridge, Massachusetts took a unique approach to local history.2 The project, “If this house could talk” featured buildings with cards sharing information about the property’s history.

It started a grassroots movement that spread slowly throughout the United States, redefining how we view and interact with our local history. Sticking close to its roots, the movement focuses on providing the histories of concrete buildings or objects. In some cases, digital tools have been used to create maps of important sites or army movements across the area. While this project made a significant contribution to the field of local history, we argue that it is just as important to tell individual stories as it is to tell the history of a place.

Digital humanities was once considered one of the “ugly stepchildren” of the humanities. However, it started gaining momentum in 2008 when the National Endowment for the Humanities created the Office of the Digital Humanities with an initial operating budget of 4.5 million dollars.3 Yet, a decade later, many universities have not realized the potential of the digital humanities.4

Where it has been accepted, the method has moved through the humanities slowly, working through Mainstream White American history. Many now see it as a place for more specialized fields of academic study, such as Black History and Gender, Women, and Sexuality Studies. However, in order to build a strong foundation for the digital humanities, case studies are necessary. Historically, case studies have been critical to the development of these fields, as seen through the use of census records from the late 1970s and early 1980s.5 We believe that by applying census records and digital humanities techniques to the development of similar case studies, we will provide the support necessary for growth of women’s history in the context of digital humanities.

Through the Iowa Township Project, we aim to tell the stories of the people of Grinnell, using data from the United States Census, the Iowa State Census, and local plat maps. Using ArcGIS, we take a digital humanities approach to visually exploring our data. This project uses Grinnell, Iowa as a case study demonstrating that rural and semi-rural local history can be both interesting locally and relevant to the history discipline as a whole.

In the next two blog posts we will show you how we applied both principles of local history and digital humanities to show how women have been neglected by the official record and how they can be found again.