The Mass Shooting Epidemic in the United States

An examination of Stanford University’s Mass Shootings of America (MSA) dataset shows why shootings have been making the headlines in the U.S. and gun violence has become a big issue addressed in the campaigns of presidential hopefuls. Stanford MSA defines a mass shooting as “3 or more shooting victims (not necessarily fatalities), not including the shooter. The shooting must not be identifiably gang or drug related” (Stanford Mass Shootings in America, courtesy of the Stanford Geospatial Center and Stanford Libraries). 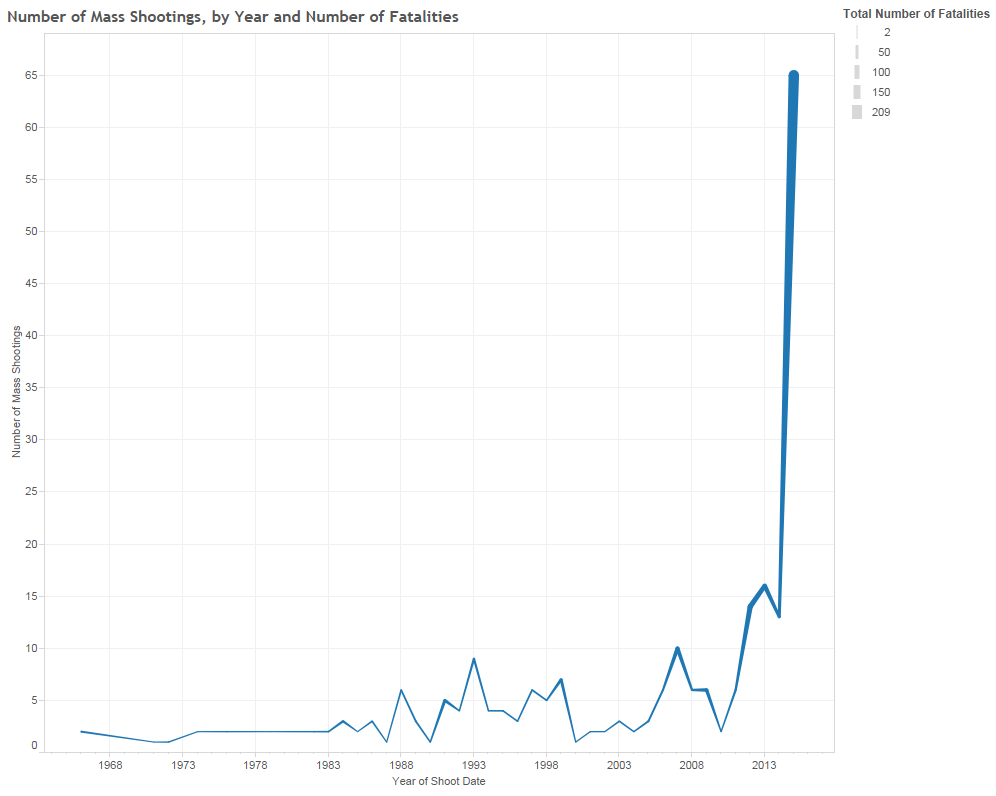 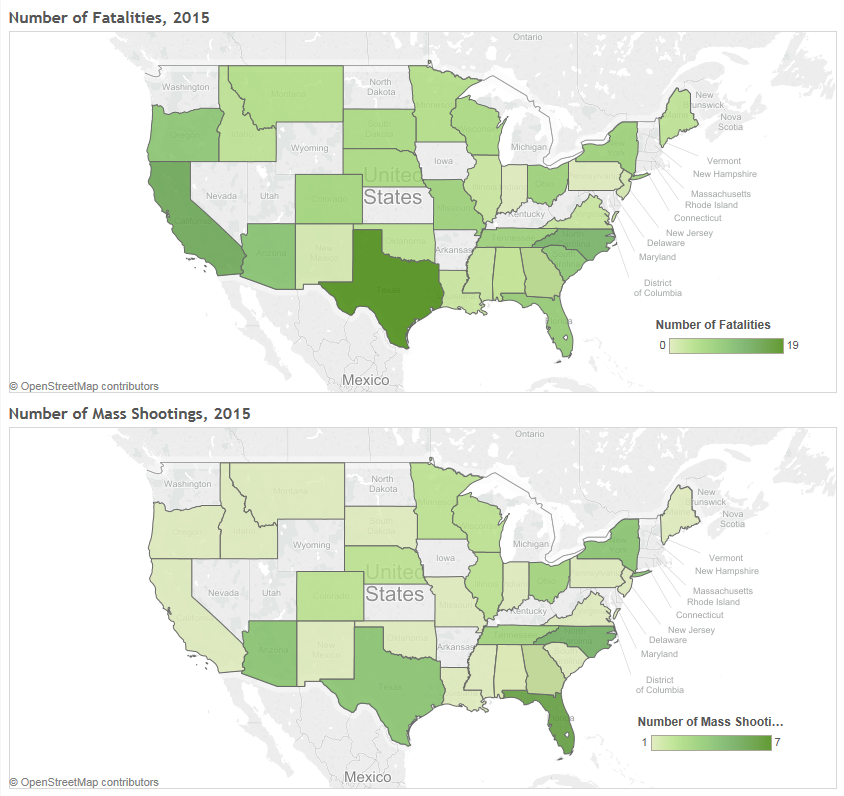 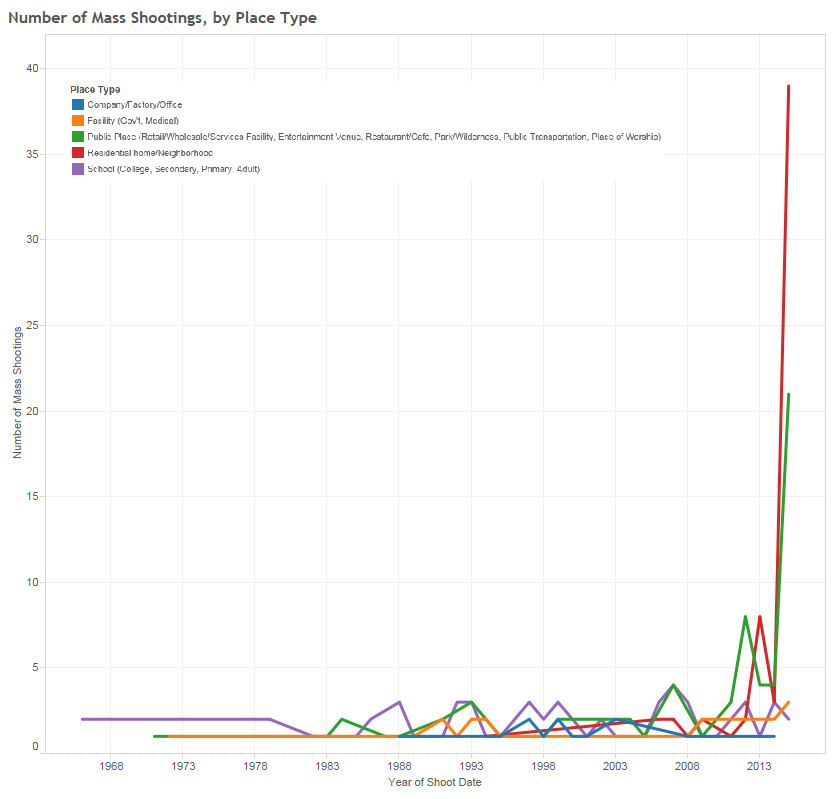 The Southern states had the largest numbers of mass shootings in 2015. Florida led with 6. Even though Texas had fewer mass shootings (4), the state sustained the most fatalities, 20. North Dakota and New Hampshire are the only 2 states that have not experienced any mass shootings in the 49 year time period covered by the data (not shown). In 2015 39 mass shootings occurred in residential homes & neighborhoods, while 21 happened in public places. Back in the late 90s, schools were the primary target of mass shooters, with 3 incidents in 1997 and 1999, each. 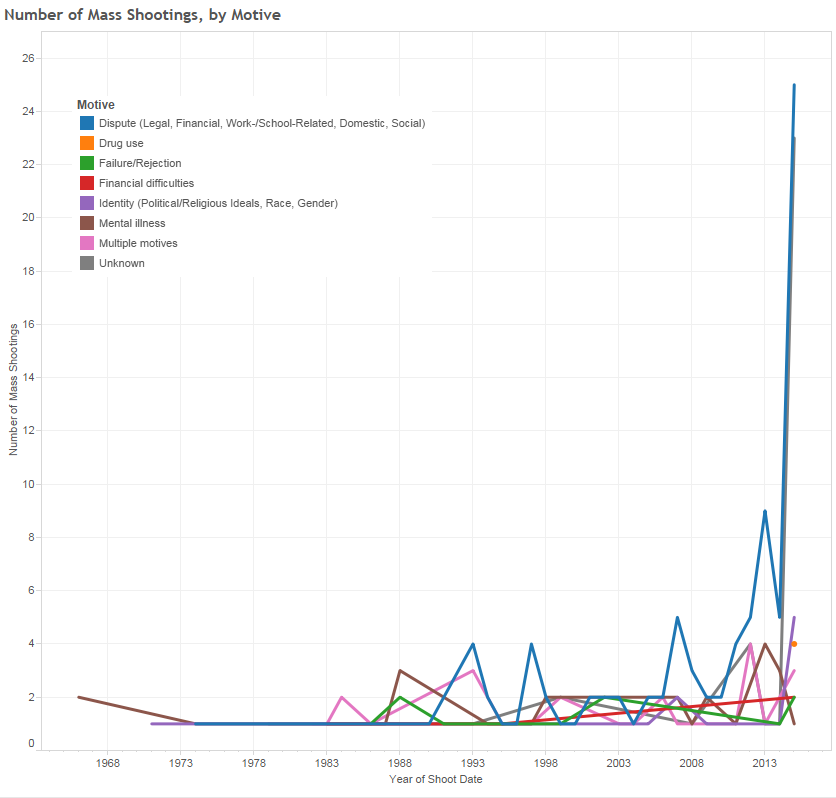 Most of the mass shootings in the past 8 years have stemmed from a variant of an altercation, be it domestic, legal, financial, or school-related. Of course it can always be argued that all mass shooters have mental health issues, but contrary to popular belief, according to these classifications,  shooters’ mental health issues as a direct motive for shootings  has not increased in recent years, with only one incident in 2015 attributed to mental health issues. Perhaps what’s most troubling is the high number of cases where a motive can’t be identified, 23 in 2015, suggesting the need for further, more comprehensive study into the underlying causes of these mass shootings.

Many pundits largely attribute the US-specific phenomenon to things to lax gun policy. However, any progress to change gun laws, even to fund research into the causes of gun violence, has been (and continues to be) stymied by the gun lobby, led by the National Rifle Association (NRA). Re-examining the nation’s access to guns is imperative, and those in Congress who are funded by the gun lobby need to be open to that re-examination. While the data available is informative, unfettered research is integral to truly understanding the nature of gun violence and to finding effective policy solutions.