A comparison of the two maps above yields a surprising conclusion: African-Americans are much less likely to be arrested in areas with higher African-American populations!

One of the best examples of the use of statistics in policy research is in the controversy about New York City’s Stop-Question-and-Frisk policies, which give police officers the right to stop, search, or arrest any suspicious person with reasonable grounds for action. These policies were an effort to reduce crime rates, under the philosophy that stopping suspicious persons will prevent smaller crimes from escalating into more violent ones. In recent years, the NYPD had been under fire for alleged racial discrimination in their stops. Research on approximately 175,000 stops from January 1998 through March 1999, for example, showed that Blacks and Hispanics represented 51% and 33% of the stops, while only representing 26% and 24% of the New York City population respectively. The NYPD defended their practices, saying that since crimes mostly happen in black neighborhoods, it is natural that more black people would be found suspicious of crimes.

Using the stop-and-frisk dataset provided by the NYPD and 2010 census data, numbers were compiled into an interactive heat map of arrests directly related to the stop-and-frisk policy in New York City, as an aid to visualizing this disparity in race. 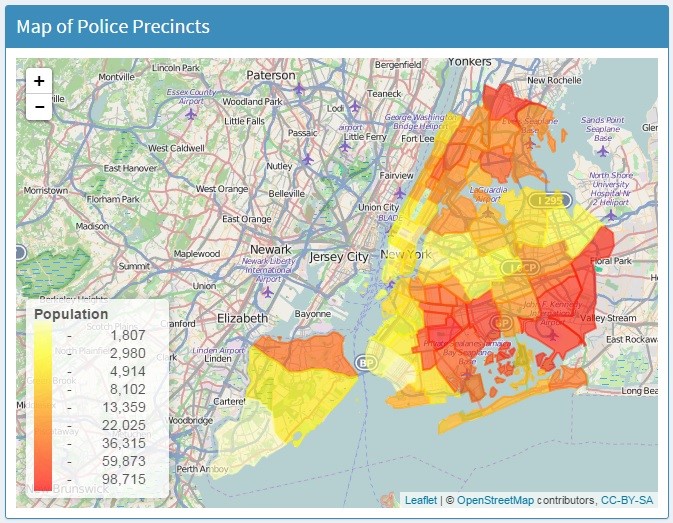 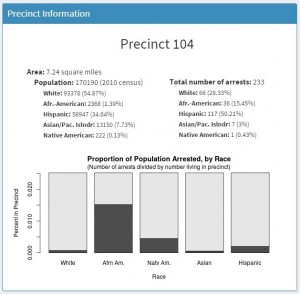 Evidence of racial disparity is clear.  African-Americans are consistently overrepresented in arrests compared to the population in each precinct.

Use this visualization to explore the trends in arrests due to the stop-and-frisk policies in New York:

Another visualization on stops and arrests in New York City can be accessed here. You can also go here for more information on these data visualizations.  These visualizations were created as part of a Grinnell College Mentored Advanced Project with Ying Long and Zachary Segall under the direction of Shonda Kuiper.