Analyzing the American Political Sphere with “We the People”: Part 2

DASIL’s “We the People” data explorer allows users to search petitions based on subject—civil rights, economics, and defense, to name a few. My previous post about “We the People” briefly examined government responses to petitions but did not consider their subject. This analysis expands on that post by grouping together petitions with similar subjects into three broad categories: Government, Science, and Sociology. The government category includes subjects like “Budget and Taxes” and “Defense,” science includes “Technology and Telecommunication,” “Environment,” and sociology includes “Disabilities,” “Education” and “Poverty.”  I only included petitions with over 5,000 signatures in my analysis to limit the number of results. 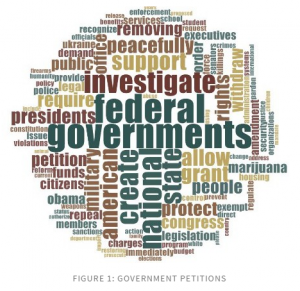 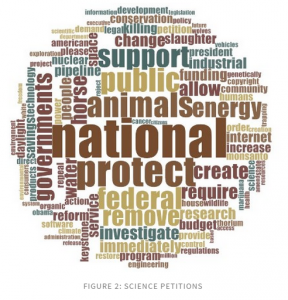 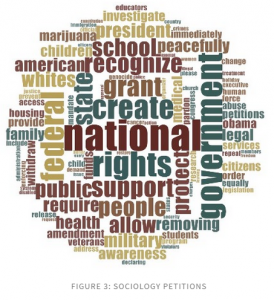 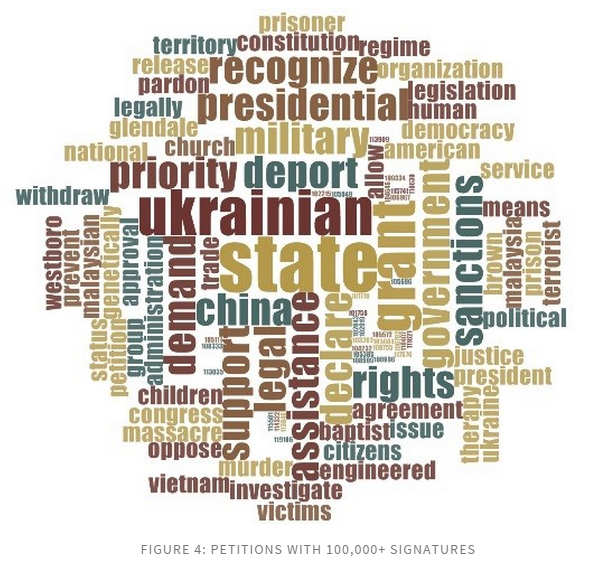 Comparison of the verbs in petition titles reveals that every category favors positive government actions.  The prevalence of positive verbs is most obvious in petitions with 100,000+ signatures. Nearly 81% of the references included in this category are positive calls to action. Some of the most popular include:

For comparison, popular calls to negative action include:

The predominance of petitions involving positive actions signals that the Americans utilizing “We the People” prefer government actions that broaden the sphere of actions available to them rather than those that directly narrow actions available to others.  Though this conclusion holds true for all three categories, the trend is weaker in the science category, which includes a large number of petitions to ban certain environmental practices or energy extraction methods, like fracking.

The analysis of “We the People” petitions based on category reveals two trends. First, the 100,000 signature threshold filters out niche interests and indicates that complex political issues garner the most popular support. Secondly, the types of verbs in petition titles suggest that Americans prefer a government that serves them by providing services rather than banning undesirable actions.