Examining the American Public Through “We the People”

If the titles of petitions submitted to President Obama on the “We the People” website are any indication, Americans care deeply about current political issues and want the government to grant them a broader range of rights and services, although stopping current actions is another common theme. 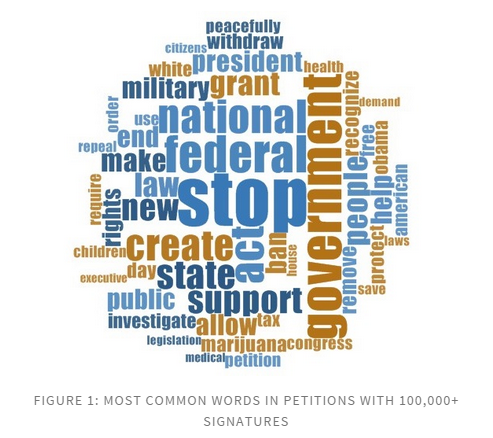 “We the People,” a portion of the White House web presence launched in 2011 allows citizens to draft petitions for the President and garner electronic “signatures” to support their chosen issue. Petition topics range from amusing to serious. The platform hosts petitions to “Secure resources and funding, and begin construction of a Death Star by 2016” and to “Deport Justin Bieber and Revoke his green card” as well as petitions to “File charges against the 47 U.S. Senators in violation of The Logan Act in attempting to undermine a nuclear agreement.” DASIL’s data explorer allows searches of these petitions based on keyword, subject category, or number of signatures. 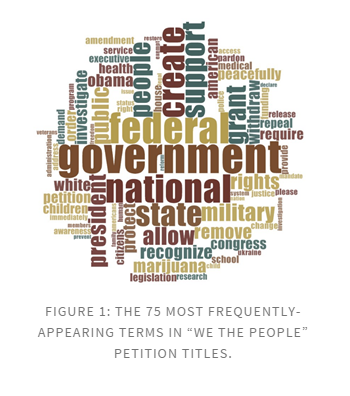 The word cloud above reveals an interesting characteristic of the most popular “We the People” petitions. While frivolous issues do appear on the forum, the most supported and reoccurring issues are serious: governance, health, security, and services, rather than less wide-reaching political concerns. 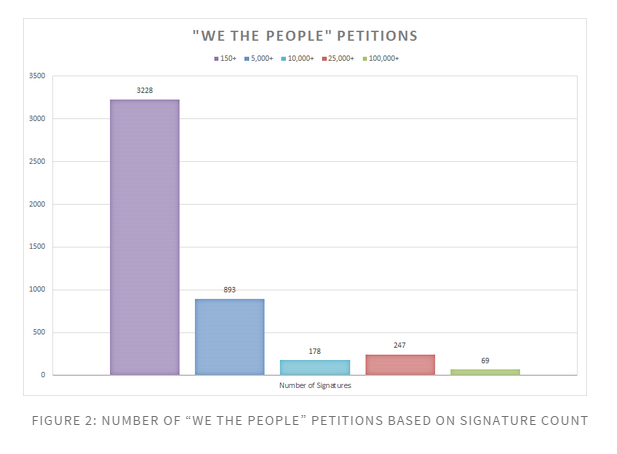 Glancing through the White House responses to petitions, it is clear that Americans place perhaps too much faith in their government’s ability to fulfill their requests.  The federal government does not keep a formal list of “hate groups” and therefore cannot declare that Westboro Baptist is one, even though the petition to do so has the most signatures of all “We the People” petitions. Neither can they deport Justin Bieber.

However, petition responses also make confirm that petitions do serve a purpose. Recent responses contain information from the FDA about GMOs, details on the Iran nuclear deal, and a detailed explanation of the debate on body cameras for law enforcement.  These responses indicate when the government is already working to pursue its citizens’ interests, and, occasionally, report that the issue has been forwarded to the appropriate department for consideration. Therefore, though petitions occasionally overestimate the government’s scope of action, petition responses grant concerned citizens access to clear information about their greatest concerns.