You may have heard the term “food desert” tossed around in conversation lately. But what does it mean? In 2010, an estimated 29.7 million Americans lived in low-income areas and were more than one mile away from a grocery store (Ver Ploeg et al., 2012). To see if the area you live in is considered a food desert, visit the Food Access Research Atlas at USDA.gov.

Lawmakers, physicians, non-profits, farmers and a host of other professionals have started to recognize the importance of this problem. Even the First Lady of the United States, Michelle Obama, has made it her mission through her Let’s Move! campaign to combat hunger and encourage the consumption of healthier food in order to have a more active lifestyle. Access to food has been studied for its potential health risks, such as obesity and respiratory problems.[1] Attention has also been paid to the characteristics of those who are in food deserts and indicate that African American and low-income households are less likely to have grocery stores nearby.[2]

The U.S. Department of Housing and Urban Development’s (HUD) American Housing Survey (AHS), provides a national data set that can be used to explore the issue of access to grocery stores. The AHS is a national survey currently conducted in odd-numbered years. In 2003, the AHS began asking people whether or not they had a grocery or drug store within one mile of their home. The same question was asked in 2005.

Professor Doug Hess, in Political Science/Policy Studies, recently found that these data had not been analyzed in depth. I worked on this data for a MAP last summer and continued working on it this year. I will be presenting my data at the Midwest Political Science Association conference in Chicago next month.

Using the 2013 data, I created three models that use logistic regression to identify characteristics that predict limited access to grocery stores. The models examine the following outcome variables(all measuring within 15 minutes of the respondents’ home: no full-service grocery store, only a convenience store, and neither a full-service grocery store nor a convenience store). The models include predictors identifying several socioeconomic characteristics (only race and the ratio of income to poverty are discussed here).

The results of my models confirm what prior research using different data found about the relationship of race and income to store access. All non-White race and ethnicity categories are less likely to have a full-service grocery store within 15 minutes of their household. Non-Whites are also more likely to say that they only have a convenience store nearby.

Income as a ratio to the poverty threshold produces a pattern in all three models’ results. Those in the lower-income categories are more likely to report that they do not have a full-service grocery store, only have a convenience store, or do not have either store nearby. 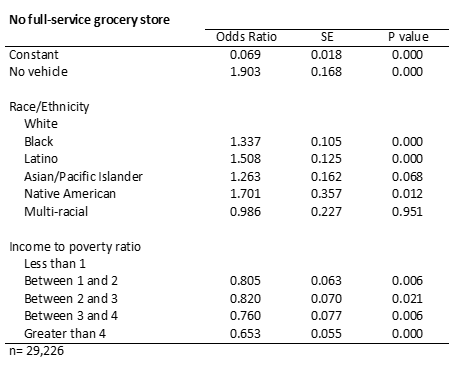 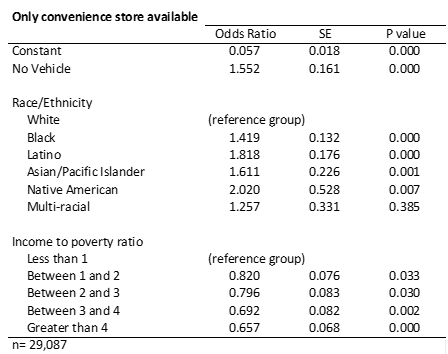 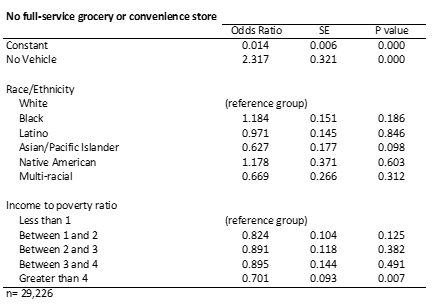 Research is beginning to look at the variety in quality of grocery stores, in terms of the healthfulness of the products they sell, and the 2013 AHS provides a crucial first-glance at the inequality of access that exists in America today. Hopefully, in the near future, the AHS will expand their questions about grocery store access, more research will be done, and policy in the U.S. will change to reflect the seriousness of this issue and begin to resolve the current situation.