Why Debunking Questionable Divorce Statistics Could Soon Get Much Harder 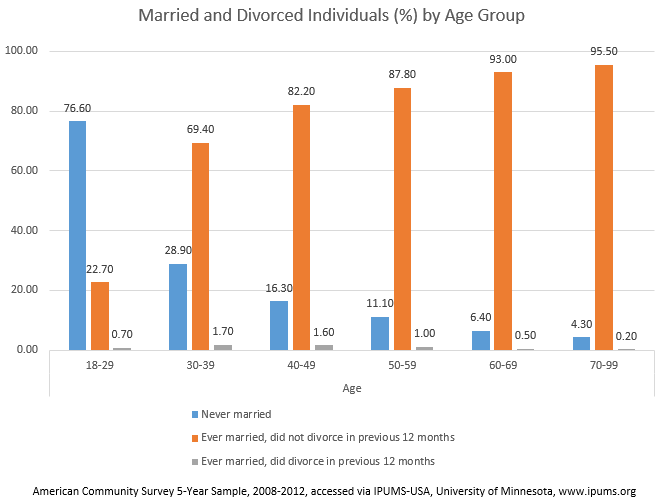 “50% of all marriages will end in divorce” is one of those statistics that has become common knowledge in the US, where it is casually thrown around, usually unencumbered by a citation. Why cite your source when everybody knows it to be true? Of course, like many such factoids, its veracity is questionable. But how can we find out how many marriages really end in divorce? And why might this piece of information soon become much harder to estimate?

Methods for collecting divorce statistics have changed several times since the first official report of U.S. divorce statistics was published in 1889. By the early 1990s, detailed data on divorces could be obtained using one of two different sources. One source was official divorce records, which state governments collected from local courts and reported to the National Center for Health Statistics (NCHS). However, many states did not report complete data, and the NCHS quit collecting this microdata entirely in 1996. It still, in theory, collects a count of the total number of divorces granted in each year, but several large states, including California, do not report even this data. The other source was the Current Population Survey’s Fertility and Marital History Supplement, which asked respondents about the dates of all of their marriages and divorces. The Census Bureau stopped using this supplement in 1995.

From 1996 until 2008, the only available microdata that included detailed questions about divorce came from small surveys that did not contain enough observations to do many types of analyses. Then the Census Bureau added a series of questions to the American Community Survey—the largest such survey performed in the United States—about marriage and divorce. These questions asked whether respondents had married or divorced during the previous year, as well as how many times respondents had been married and the year in which their most recent marriage began. As soon as the first round of data from this question was released, researchers could begin estimating some statistics that they hadn’t been able to estimate with reasonable accuracy for over a decade, such as annual divorce rates for different age ranges or socioeconomic groups. As more years of data became available, researchers would be able to develop models that would accurately predict the percentage of marriages that will eventually end in divorce. However, the Census Bureau recently deemed this group of questions to be “low utility”, and it is considering dropping them from the American Community Survey in 2016. The proposed change drew public outcry from population researchers, economists, and family researchers, and a final decision has not yet been made about dropping these questions. But if they are dropped, we might never know the true percentage of marriages that end in divorce.