What is the State of the Union Address Really About?

The State of the Union Address has been an American tradition since 1790.  The President of the United States addresses Congress, reports the current condition of the country, and also presents legislative plans.  But, does the content of speeches change over time?  To examine this question, DASIL staff downloaded the full text of every State of the Union Address, and I used NVivo to analyze them.

Some topics have been more pressing in recent times—like terrorism. 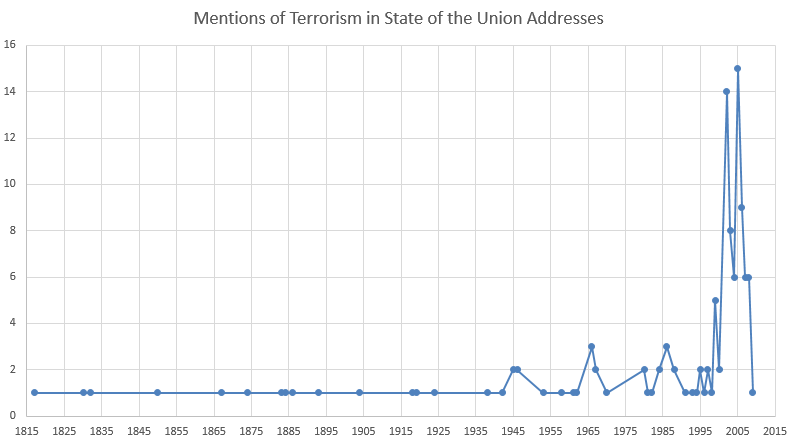 Clearly, mentions of terrorism were at their peak during the Bush administration during the War on Terror.  The mention of terrorism has since declined, and it was never really mentioned in the past.  The two peaks in 1966 and 1986 are in reference to the Vietnam War and the Cold War, respectively.

For some topics, the trend may be a little less clear.  Immigration is one issue that has been debated throughout time, and NPR predicts that it will be a topic in Obama’s State of the Union Address tomorrow. 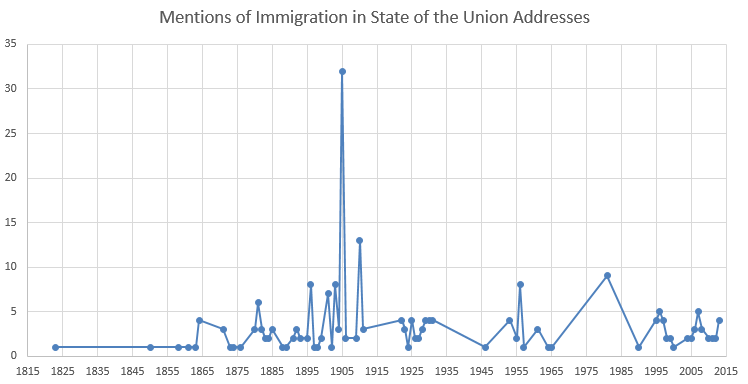 However, to find the greatest number of mentions of immigration, you’d have to go back 105 years.  The word “immigration” is used 32 times in six paragraphs by Theodore Roosevelt—and it’s all in praise of the incredible growth in immigration rates at the time.  By contrast, “immigration” is said nine times in 1981, and the discussion of the policy issue walks a much finer line between allowing immigrants and tightening restrictions on illegal immigration.  Will Obama indeed discuss immigration?  He has mentioned it in the State of the Union at least twice every year of his presidency except for 2009.  It is not unreasonable to suggest that Obama will discuss the topic, but doubtful his mentions of immigration will match the extent of Roosevelt’s.

But back to the question posed in the title of this blog.  What is the State of the Union Address really about, beyond its definition?  This word cloud provides some good suggestions:

Government, Congress, and the United States are the most frequently occurring words—which make sense considering the purpose of the State of the Union Address.  It is also a time to run through some of the highlights of the nation.  Words like “present,” “great,” and “power” help to describe the positive things going on in the country at the moment.  Words relating to the American people are frequently used.  Specific individuals as well as larger segments of society are frequently referenced to solidify the impact of any proposed legislative initiatives in State of the Union Addresses.  Foreign policy is also a presence in these speeches, indicated by the words “foreign,” “world,” and “nations.”

Will you be watching the State of the Union Address?  Listen to see if Obama mentions any of these keywords.  I will be listening to see if he concludes with “God bless America,” continuing the tradition established by Ronald Reagan (with roots in 1862, by Abraham Lincoln).