Political Science majors enter politics. Biology majors become physicians. History majors…wind up teaching history. We’ve heard it all before: The major you declare during your college days has a strong influence on your career options and your marketability in those fields. The data presented in this “Grinnell College Career Paths” visualization help to debunk the “major=career” myth.  It also reveals the complexity of the career development process. Especially in a liberal arts setting, where conversations of transferable skills and experiential education abound, students choosing a career should consider both their major and experiences gained outside of the classroom. 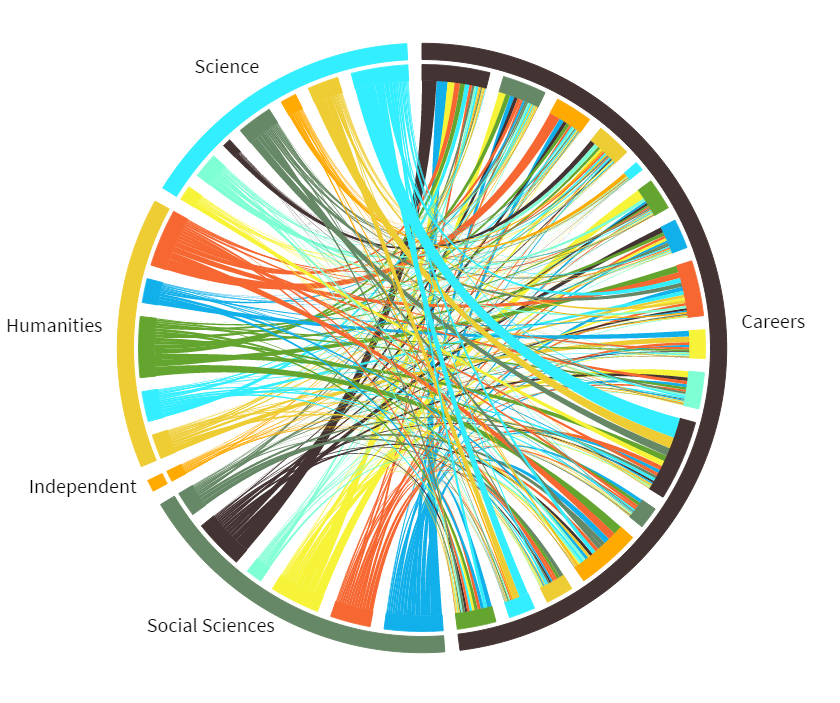 Your first glance at these data might be at one of the potential majors you are considering.  Let’s say you find your Anthropology classes fascinating.  You could read your textbooks all night and find yourself conversing with classmates during lunch about the topics you’ve learned.  These are all good signs.  However, at some point, you might ask yourself, “What can I do with this major?”  According to the data presented here, an Anthropology major can lead you to any number of fields.  There is a fairly equal spread of career paths — from public service to information systems — chosen by Grinnellian Anthropology majors.  How do you decide which path might be a better fit for you? Similar to how you figured out whether or not you like pancakes. You gave it a try, or, as we formally suggest, you participate in some form of experiential education.  You get your feet wet in the world of work via serving, interning, or shadowing. Additionally, you talk to alumni about their career paths. You do all of this with the intention of discerning if this particular path aligns with your strengths, interests, and values, and is something you’d like to pursue long-term. Learning about — and being able to articulate to others — the transferable skills of your Anthropology degree is essential to applying your major to whatever field you choose.

Let’s look at the data from another angle. Perhaps you want to enter the Business and Management field, with a dream of becoming the CEO of a company. A major in Economics or History would serve you well, as it has 23% of the alumni surveyed here. But in what other fields did the other 77% major? How did they end up in the world of business? Through a diversity of paths, surely. In 2006, Bloomberg BusinessWeek published statistics about the hiring decisions of major financial services companies and investment firms. Citigroup, the world’s largest financial services company, shared that almost 60% of their new hires entered the industry with no formal business background. Instead of focusing hiring decisions on the specific major an applicant chose in college, these companies looked at the transferable skills and knowledge base the applicants brought to the table. The ability to acquire knowledge, synthesize and solve complex problems, and communicate effectively with a variety of constituencies, holds just as much, if not more, weight as the technical, industry-specific knowledge one has. In fact, the current CEO of Etsy.com graduated with a liberal arts degree in English and attributes much of his success to these same transferable skills.

For students exploring different fields of study and career paths, I strongly encourage you to use the strategies suggested here. College graduates enter the world of work with a wealth of knowledge and experiences, often both domestic and international, and possess a set of marketable skills which deserves applause. Overall, the career development process is just that — a process — and it is a combination of your major and skills and experiences developed through experiential education (e.g., service, internships, undergraduate research) that makes up your marketability for a career field. Instead of buying into the myth that a major alone will determine your future, you now have an illustration of the multi-faceted, complex process that is career development.