Additional research would be necessary (and may be forthcoming from DASIL) on why and where children are not able to access this program, but two points are worth making with a preliminary analysis of the data.

First, private schools perform much worse than public schools on this measure of coverage. The table below provides the ratio of free and reduced-price breakfasts to lunches for each October of the past ten completed school years. Whereas the histograms above merged public and private school data, this table separate them out by meal sponsors. Some private schools have their meals provided by a public school system and those children are listed under public schools in this table. Nonetheless, this analysis would indicate that we might want to look to private schools to help reach more low-income students with this nutrition program. 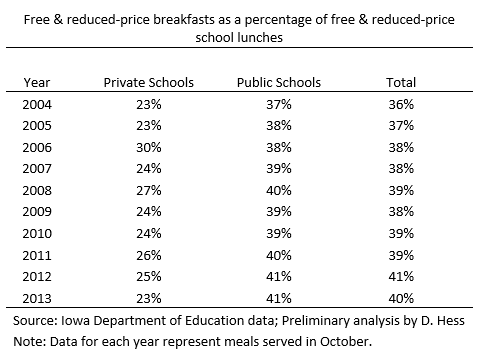 Fortunately, and perhaps because of the rising number and percentage of children in poverty, a larger percentage of Iowa school sites are offering the breakfast program each year. Still, as seen in the final table, approximately nine percent of the school sites in Iowa that provided a lunch in the 2013- 2014 academic year did not provide breakfast. 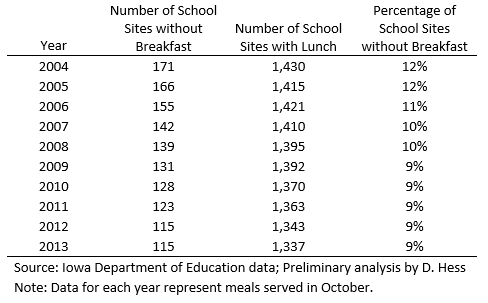