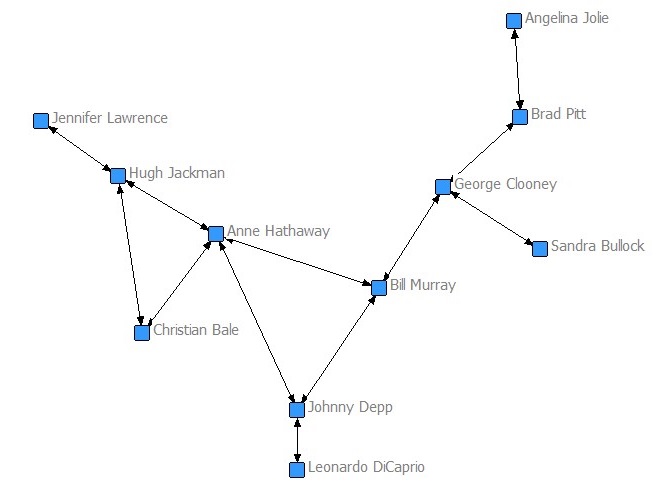 Everyone talks about networking.  Social networks are increasingly important—from using Facebook to keep in touch with friends and family, to using professional contacts to find jobs.

Network of Actors and Actresses

Consider the network graph of actors and actresses above, with the links between them signifying a co-star relationship.  The actors are nodes and the lines between them are edges.  Using this network map, we can gain better understanding of their relationships.  Anne Hathaway is the most central actress—the most-connected node in the network.  Her degree centrality is 4, a simple count of the number of edges that are drawn to and from her.

Additionally, we can identify subgroups, or cliques, within the network.  These cliques consist of at least three members of the network who are all interconnected with one another.  Hugh Jackman, Anne Hathaway, and Christian Bale form one clique of co-stars.  Anne Hathaway, Johnny Depp, and Bill Murray form another.

We can use this network map to not only see the web of connections between these actors and actresses, but also to think about their relationships.  Anne Hathaway could be an important actress to hire because she has many professional relationships.  Bill Murray could be a key actor to hire to bridge gaps between two otherwise disconnected branches of actors.

What I’ve described in this brief post are just some of the ways social network analysis can be used to study connections among individuals.  These concepts can also be applied to studying the network between other entities: corporations, governments, and nations are just a few examples.  Using network analysis, it’s possible to not only show the flow of the connections between actors, but to also measure and quantify them.  Social network analysis is a useful tool not only for the social sciences, but for the Humanities as well, since it not only shows how individuals are connected within a network, but also how relationships, ideas, or resources flow.

On Thursday, English Professor James Lee will demonstrate the utility of social network analysis for the digital humanities with a post exploring the social networks in Shakespeare’s plays.

Notes: I used IMDB (the Internet Movie Database) to determine co-star relationships.  There was no particular reason for selecting these actors and actresses, though Bill Murray was intentionally selected to bridge the gap between the two parts of the graph.